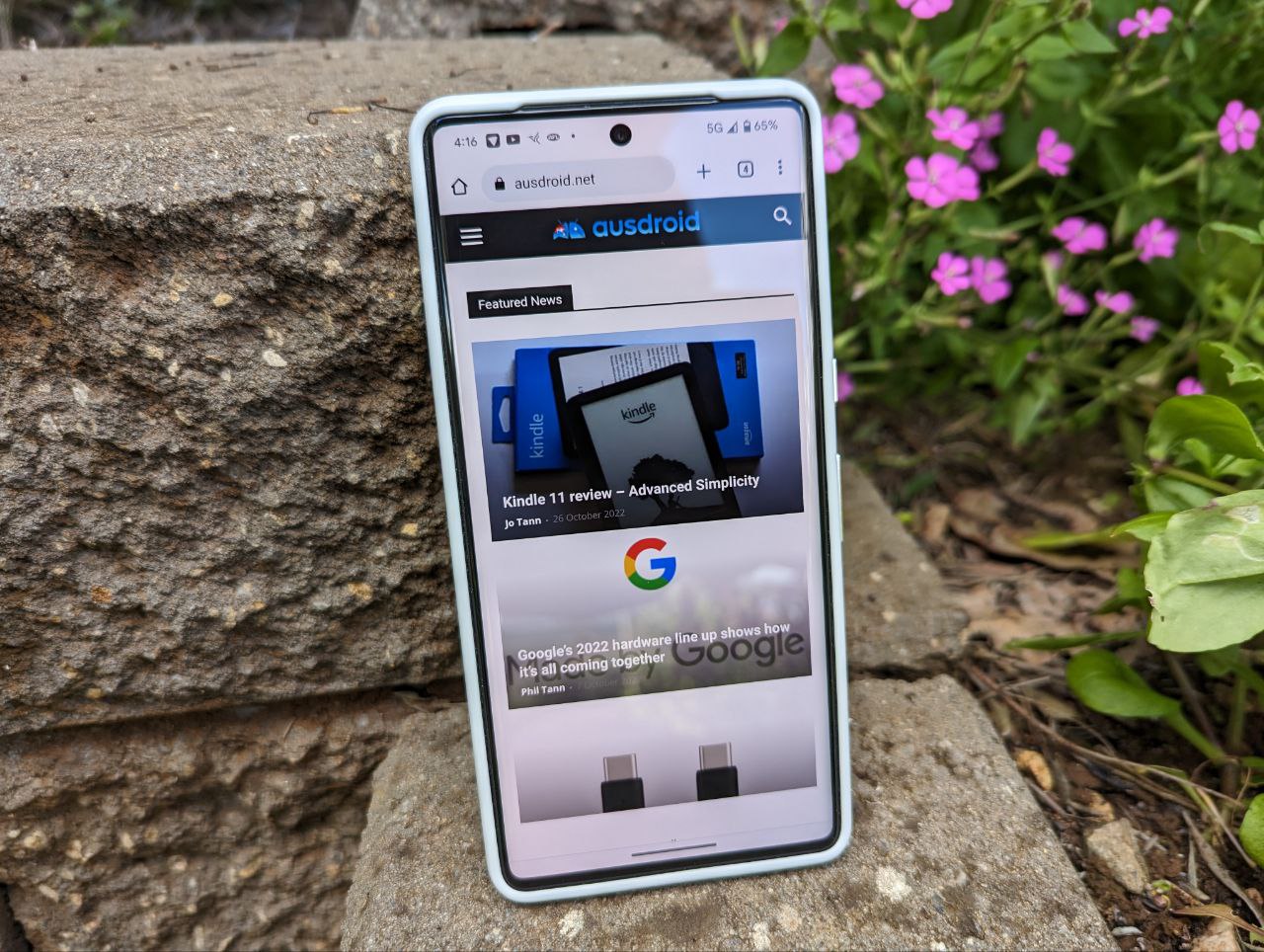 Even prior to the device’s official release, we had seen pretty much everything there is to know about the Pixel 7 Pro. These days that’s very much the norm with leaks becoming more prevalent, so it’s hardly a surprise. What did surprise is some of the feature updates that Google had in store for the Pixel 7 Pro (and Pixel 7) to improve the experience for users.

This is the biggest, baddest model that Google has to offer for 2022 and yet maintained a pretty affordable $1,299.00 price point; so is it worth the upgrade?

What’s in the box?

The short answer is, not a lot!

The box itself is quite small when you consider the physical device it’s housing, so that’s an indicator you’re not in for anything that’s going to rock your world. Inside the box, you’ll find the phone, a cable, USB-C to USB-A converter, a SIM pin and some instructions. It seems Google has gone to the level of thinking that instructions don’t get read, so why bother…

Most of the big tech companies now aren’t including charging bricks and, Google is one of those. There are a couple of quite reasonable justifications for this, including the fact that most people would have quite the charging arsenal in place, and the fact that charging power has changed over time. If you want fast charging, then the extra $45.00 for a charging brick from the Google store, or one of the other charging options on the market is probably a sound investment.

We covered the basics of the changes in hardware when we took a first look at the Pixel 7 Pro. For anyone that hasn’t had the chance to read up on the specs though, here they are:

The feel of the device has been polished slightly from last year’s Pixel 6 Pro and I mean that in a couple of ways. The physical edges of the device feel a little more rounded and natural compared to the 6 and, the surfaces — made of Corning Gorilla Glass Victus — of the device are ultra smooth; which does make me worry about dropping the phone. There are plenty of good cases out there to protect your phone, but it’s worth being aware that some of those are pretty slick to the touch too.

The transition, for flagships at least, seems to be completed now and it’s expected that you’ll get an under-screen fingerprint sensor. That’s exactly what Google has delivered here and, while it’s better than the Pixel 6 Pro’s sensor in the early stages, this one still isn’t particularly fast or 100% reliable; that’s fine though because I’m finding face unlock to be very reliable.

The battery life is a big contributor to a great experience

Something that seems to have escaped the attention of a number of people I’ve spoken to is that the battery on a Pixel device seems to get better with time. The software learns your habits when you’re likely to use the device and certain apps heavily as well as what apps you use briefly and then shut down.

So in the early stages, I felt like it was going pretty well but after a couple of weeks; I’m really happy with what I’m getting from the 5,000mAh battery in the Pixel 7 Pro.

This great battery experience is despite the frankly, stupid number of apps I run, the regular chunks of time I run streaming (either music or video), messaging and even apps that I run battery exceptions for because of the need for instant notifications when they’re available. NB. Adaptive battery settings are on by default.

The day starts for me around 6 am which is when my phone comes off charge. Throughout the day, it’s not unusual for me to have 6.5 hours or more screen on time during the day, and I’m still getting to the end of the day with somewhere between 15% and 30% remaining when I plug in at around 11 pm. The difference is largely dependent on whether my streaming has been video or music only.

Even on extreme days of use — constant phone calls, over 8 hours of screen on and heavy use all day — I’ve only needed a 15 minute top up charge to get through to the end of the day. This even stands true once I switched the screen resolution from the default 1080p to 1440, there was no notable difference as mentioned in the first look post for the device.

To really nit-pick on this, I’d like the charging to be faster. But I also understand that to achieve this — SUPERVOOC speed — there’s likely to be a cost involved that would push the price of the Pixel devices higher.

Performance, Software and AI: Pixel devices are leading the way

There’s so much going on with a Pixel device these days. Possibly the most important thing to note in the early stages is that this is Android the way Google envisions it. It’s clean and pure, with zero bloatware; only the apps you actually want on your device. That integration between the performance hardware, Google’s software and AI has now been completed. So much so that if you’re buying a Pixel device, you’re probably considering some of the AI features as a key point in your buying decision. With the Tensor 2, so much is done on the device without the need for a connection to online services to complete the work.

In reality, there are far too many features in terms of software to go through in a device review. There are a couple of highlights I’d like to put forward though before we move onto the camera.

The use of voice typing isn’t just better than in previous generations, it’s taken a significant leap forward. The voice recognition is very accurate, even in my car with the background noise of the road. What has impressed me most in this area, is the accuracy of the capture including punctuation such as question marks are usually accurate.

The other relates to personal needs and my paid employment in the disability sector. Having the ability to have videos live transcribed, text-to-speech for vision impaired users, hearing aid links and guided frame on selfies: All combine to make the Android platform more accessible to users with a variety of disabilities. It’s a wonderful thing to see happening, but it should have happened years ago; although the technology may not have been anywhere near as good as the current delivery.

The Camera: Google just showed the way forward to its competitors

Just putting in a gallery of images doesn’t show you how good the camera on the Pixel 7 Pro is. While time has been somewhat limited to really test the camera, there have been good opportunities and I’ve seen some incredible results. So to set the scene, there are a lot of modes available on the Pixel 7 Pro which include:

It’s still not perfect but the shutter speed is a lot better than previous devices in the Google range. A couple of times I’ve found that the immediate preview isn’t quite what the final image delivers. It’s come a very long way from some of the results I got last year on the Pixel 6 Pro and recently the Pixel 6a; particularly trying to capture a fast-moving target like a child. The camera experience on the Pixel 7 Pro has been excellent, with outstanding quality images. The colour reproduction, the crispness of the images and some of the — you can see it happening if you’re quick — post-processing really does enhance the final product vs oversaturating colour and making them look unnatural.

There are some other really cool features that — at this time — are available on the Pixel 7 Pro such as Photo Unblur. As you can see below, this can be completed on old photos like this speedway shot from 2006 that was taken on Canon digital camera; so as you can see it is capable of some serious magic!

Are there any problems?

It’s really splitting hairs to find much wrong with the phone, to be honest. I had a couple of odd issues early in testing which was reported to Google and seemingly fixed already. If you consider the $1,299.00 price, this is possibly one of the best value phones currently on the market; but it’s not perfect and the main items of concern have already been mentioned.

Despite the material being common with other top range devices, the Pixel 7 Pro is pretty slick to the touch. So it’s absolutely on the recommended list to put a case on the phone, but the Google cases are also pretty smooth to the touch. The other thing I’d really like to see is faster charging, not necessarily to the level of going from 0 – 100% in 20 minutes, but given there are significantly faster-charging options on the market, this feels just a touch behind the market expectations.

Closing thoughts: The Pixel 7 Pro is the full package

I’m genuinely impressed with the Pixel 7 Pro. It has delivered everywhere I expected it to and, with the AI enhancements, it has gone so much further. The battery life is excellent and will last heavy users a full day of use. This is complemented by the general performance that will meet and, probably exceed what just about any user can reasonably expect of their device. The camera offers plenty of options to capture excellent quality images. The light and colour capture are very natural and accurate, with only rare occasions where the lighting may cause a less than satisfactory outcome.

The slight $300.00 increase in cost over the Pixel 7 is well justified and if you want a phone that’s well worth the money, then this is it. I would very happily recommend the Pixel 7 Pro to any user who is looking for a larger device with a stunning screen, great performance, truly excellent camera and really good battery life.

You can pick one up online at the Google Store, or through the usual — online or bricks and mortar — retail channels.

Google has not requested return of the hardware

Improve Your Internet Marketing Effortlessly With The Top SEO Tools

Real Estate Near Me